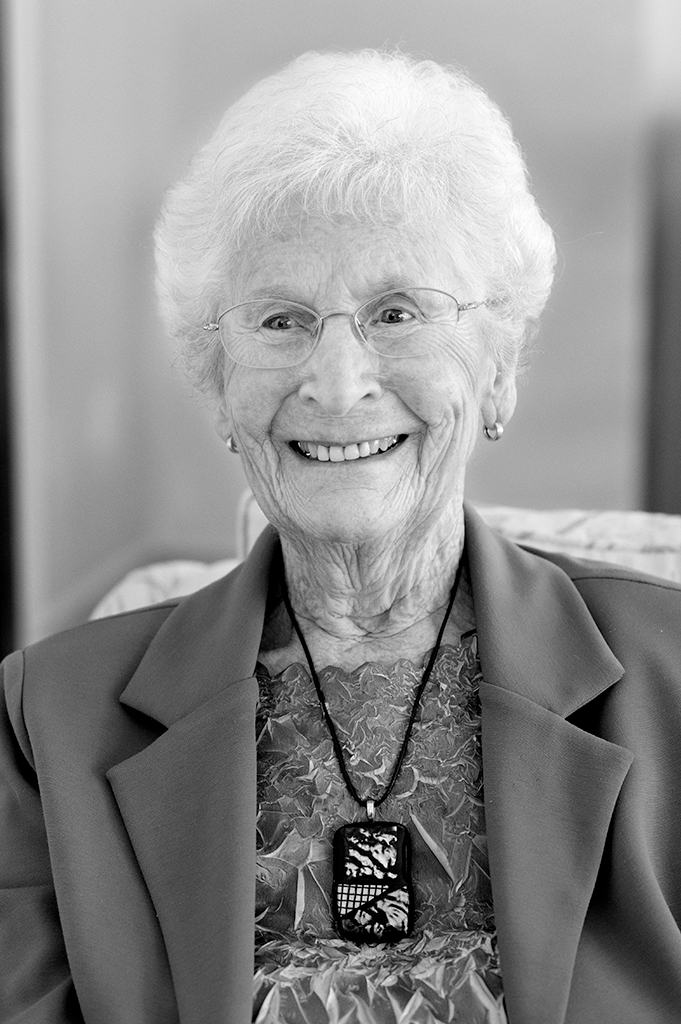 Geraldine (Gerry) Swenson was born in 1925 in New Westminster. She moved to Westham Island after marrying her husband, Paul Swenson, in 1950. Gerry was part of New Westminster Secondary School’s popular “Bugle Band.” In the 1940’s, the band was invited to take part in the May Days Parade. It was afterwards, while attending the Ball at the Municipal Hall, that she first met Paul Swenson who was from a Ladner farming family.

After a few years of courting, Gerry and Paul married on September 18, 1950.  Gerry recalls they moved into an old farmhouse that needed work, “there were only 4 rooms, no kitchen and no bathroom.” Although Gerry had trained to be a teacher, she embraced her new role as a farmer’s wife and had 4 children over a period of 5 years. The farm had dairy cows and later crops, including potatoes, peas and sugar beets. Gerry remembers it was a great community, “it was good, you knew your neighbors.” She recalls back in those days when a boat needed to pass through, the Westham Island Bridge had to be opened by hand. “There was a guy who lived there in a little house, he would have to handcrank open the bridge.” There were a few times when the bridge was out due to repairs and Gerry had to drive her pick-up onto a barge and cross over, “it was scary.”

Life on the Westham Island farm was busy but Gerry still found time to volunteer. She was part of the Kinettes, the Westham Island Sewing Circle, Friends of the Library and the Delta Hospital Auxiliary, where she’s been a volunteer for the past 42 years – she still has a shift at the Thrift Store two days a week!  Gerry also returned to teaching and was a substitute teacher at Delta Secondary School from 1962 until the 1980’s. As she didn’t allow her daughters to wear jeans to school it was a surprise when Gerry’s daughter, Jill, would walk into class to see mom was the substitute that day – and Jill was wearing jeans.  Gerry Swenson had 4 children, 6 grandchildren and 2 great-grandchildren.